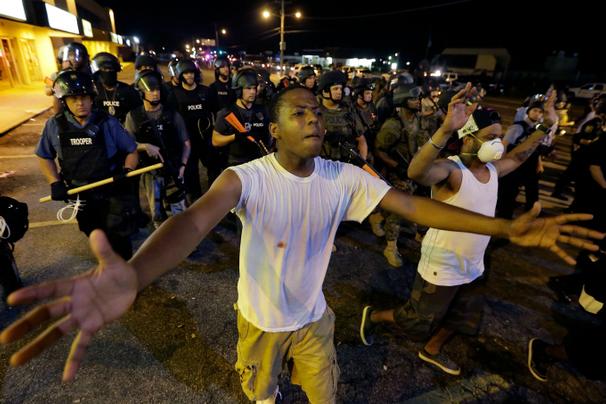 I haven’t said much about the grand jury’s decision not to indict Officer Darren Wilson for Michael Brown’s death because I’m still processing it. I have a lot of questions about they arrived at this conclusion and, until I’ve worked them out, I’m keeping my mouth shut.

Something I’m not having trouble processing is the response of many of my friends. In my Facebook feed, I have seen quite a few comments that border on racist ((and sometimes, that border is crossed with extreme prejudice)). Many of these responses displayed a distinct lack of understanding((i.e. cluelessness)) of the reality faced by African-Americans, especially in connection with the criminal justice system. Most of them just can’t seem to grasp the fact that people of color in this country have a vastly different experience with the police than white Americans do. They don’t understand that the system works for us white folks in a way that it doesn’t for anyone else.

As I read these comments/posts/responses, I was reminded of something I read in Harper Lee’s To Kill A Mockingbird. In the third chapter, Scout is complaining about her teacher after her first day of school when her father, Atticus Finch((without doubt one of the greatest father figures in American literature)), tells her “You never really understand a person until you consider things from his point of view — until you climb into his skin and walk around in it.” In an attempt to help some of my friends do just that, I want to share something Anthony Smith posted on his Facebook page:

“I’m fearful for my sons. Ever since they could go around their neighborhood and be more independent I had to give them the ‘Police Talk’. What was that talk? Whenever you are confronted by the police DO NOT…make any sudden moves, speak softly, say yes sir, say yes ma’am, don’t ask a bunch of questions at the beginning of the confrontation, keep your hands on the steering wheel, do not reach for anything in your car when they walk up to your car window.

You may think this is overkill but this may have saved one of my son’s life several months ago when he was thought to be a suspect in a robbery. He had just pulled up to a gas station. Got out to get gas and out of nowhere police converged upon him with guns drawn. He said the only thing he could think of was my voice and what I told him when he was younger. My son is a college student, engaged in his community, respectful, handsome, intelligent. He was handcuffed, had guns drawn on him and was told after the handcuffs were off of him, by the police officer: “I’ll see you next time.”

How many of you have had to deal with something like that? What if my son had just reached for his wallet and it was thought to be something else? What if my son protested the way the police came hard with guns drawn? I shutter to think…

For many people like myself this is real. I am just grateful that my son was not a Mike Brown or a Trayvon Martin that night. But he could’ve been given the history in this country.”

If you’ve ever needed proof that white people live in a different world than people of color, here it is in black and white((not sure whether or not that pun is intended)). As a white man and the father of two girls, I’ve never really worried about my children’s interactions with law enforcement officials. Anthony’s experience is a little different. It’s an experience shared by most African-American parents.

The violence we saw in Ferguson last night (and will likely see again and again) doesn’t come from “thugs” who don’t have to get up early and go to work. It is a physical manifestation of people’s anger because they feel ignored, marginalized and even oppressed by a system that has never worked for them. It is an expression of the pain felt by a community burying yet another young man whose life was needlessly ended way too soon. And, it is an exhibition of the outrage this community feels at losing out on its day in court. Seen in this light, that violence is understandable. Not defensible or excusable, but understandable.

Lastly, I want to remind all the people pissed off about the protests last night to remember your friends of color. When you refer to the protesters as “thugs”, say that Brown deserved to shot, or question the validity of the outrage in Ferguson, your friends hear you saying those things about them. Always remember that words matter, my friends. Maybe not as much as your actions, but they do matter.