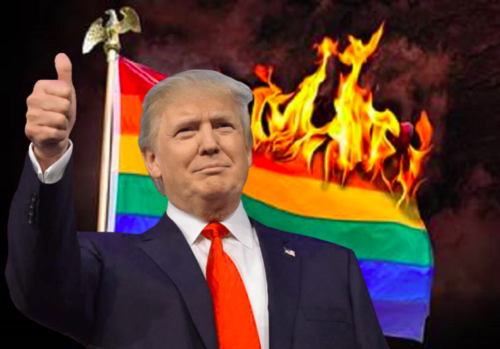 Yesterday, President Trump (I throw up in my mouth a little every time I say that) hit us with another tweetstorm to announce a new “policy”. In this latest one, he…, shit, just read it for yourself: 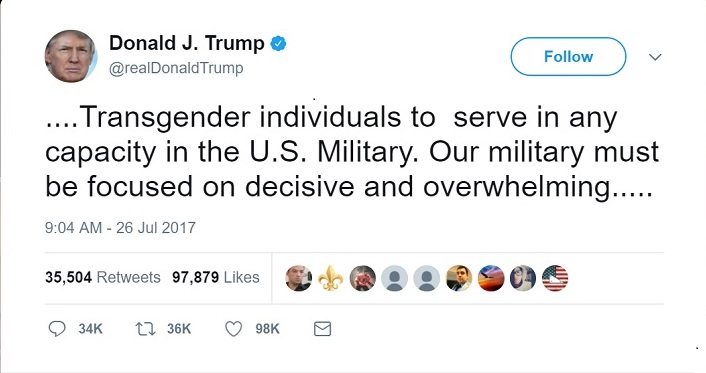 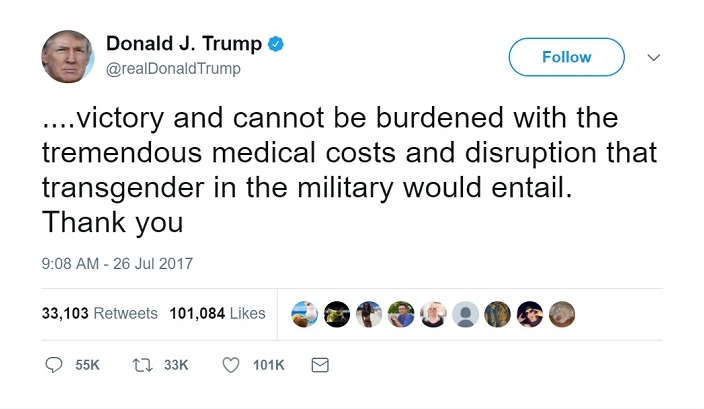 Are you fucking kidding me?

Before I go any further, I should probably tell you that this post isn’t going to be a think piece, filled with facts and studies and well-reasoned argument. I’m not at a point where I could do that and I’m not sure it would matter if I was because the people who believe the shit that falls out of this unhinged Oompa Loompa’s face hole don’t seem to be smart enough to comprehend facts and studies and well-reasoned argument, much less be swayed by them. No, this is going to be an angry rant about yet another bit of heinous fuckery perpetrated by the walking, talking id masquerading as a fully developed human being that currently inhabits 1600 Pennsylvania Avenue.

I should also warn you that everything in this post may not be all that politically correct or exhibit good allyship. I’m too god-damned angry for to worry about that shit and, frankly, I don’t really give a fuck. Most of the people who police that shit are straight, white, cis folks who wouldn’t know an actual trans woman if she walked up and bit them on the ass. Fuck that noise. For the record, I am not an ally, I’m a dad and that’s a whole different ball of wax. Allies can pick and choose when and where they want to get involved, fathers don’t have that luxury; we’re in it for the long haul. And, if you’re not, then you ain’t a dad, you’re sperm donor. And, now that the preliminaries are out of the way, let’s get started.

There’s not a lot that could drag me back into blogging about this semi-sentient hairball, but saying that my kid isn’t fit to get blood and gore and guts and veins in his teeth, to eat dead, burnt bodies because he’s trans will definitely do it. Trump is a fucking draft dodger who got 5, five, goddamned deferments to avoid service in Vietnam and now he has the nerve to imply that a trans person who genuinely wants to serve their country isn’t fit and might somehow hold us back from “decisive and overwhelmingly victory”? If anything is holding us back from victory, it’s a goddamned commander-in-chief who isn’t fit to clean the fucking latrines of real soldiers, sailors, airmen and Marines.

And, don’t even start with the whole cost thing because that shit won’t fly. A study by the Rand Corporation (I know I said no studies, but this one’s important) found that the cost of extending transition–related health care coverage to the estimated 2,450 transgender personnel currently serving would be somewhere between $2.4 and $8.4 million. Meanwhile, a breakdown of the defense budget found at Business Insider shows that the Defense Department spends a little over $64 million on Viagra and Cialis. So, let me see if I understand this, spending 8.4 million to help trans folks who want to serve will break the bank, but spending 8 times more than that so old men can get boners won’t? I call bullshit.

Fuck that tangerine nutsack. And fuck anyone who agrees with him, too. You motherfuckers make me sick.