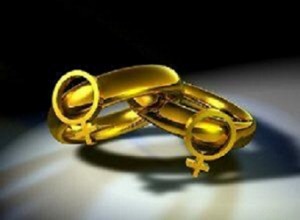 In the past couple of months, I know two couples who got married. That, in and of itself, is no big deal and you’re probably wondering why I bothered to share it. I did so because the people who were joined in holy matrimony were women. Yup, two (count ’em, two) same-sex marriages among people I count as friends already this year and it’s not even May. In both cases, the legal parts were performed out of state as North Carolina only recognizes marriages between one man and one woman. One of the couples, however, had a ceremony to bless their union and you might find the location a bit surprising: a Baptist church.

You heard that right, I said Baptist church. Oh, not that kind, though. I offer that qualifier because, here in the south, when you say “Baptist”, most people just assume you mean “Southern Baptist”. While College Park used to be a part of the SBC, those ties were severed in 1999 in response to the conservative takeover of the convention. Doing so has allowed CPBC to live into the tagline on our webpage:

“progressive, diverse, ecumenical… we welcome everyone”

Earlier this year, church leaders made the decision to perform ceremonies for couples who wished to sanctify their union without concern for sexual orientation. That decision led directly to the wedding I attended Saturday.

The question of same-sex marriage is one of the most controversial in the church these days. Sadly, that controversy tends to overshadow other issues (like the equality of women or the oppression of people who are trans-gender); it’s a case of the squeaky wheel getting the grease. Folks, we need work this out and move on to those other matters.

We are constantly told what a threat same-sex marriage is to our our nation and our families. There are numerous articles, blog posts, websites, etc. explaining the evils that will befall society and I’m not listing them here (that’s what Google is for). I’ve read/seen/heard these arguments before and they always fall flat. Saturday was no exception. As I sat there watching two of the most outstanding women I know profess their love for each other before God, their families and their community, I wondered yet again “How is this harmful to anything?” The answer is: it’s not.

There are plenty of people who would disagree, saying “But, the Bible clearly states that homosexuality is sin!” To that I say, the Bible is anything but clear on this issue. If you don’t think so, check this out. Sure, it’s a little long, but it’s well worth your time.

In her book, I Heart Sex Workers, Lia Scholl said

“… every individual has the right to live his or her life in the manner he or she wants as long as it doesn’t infringe on the rights of others. It is the same as seeing God in the other person. It is recognition that this person deserves all the rights and privileges that come with being a child of God and created in the image of God.”

Of course, she was talking about harm reduction and increasing agency for people in the sex industry, but it works here also. Because we will never see the Kingdom come until we see everyone as a child of God; in other words, as equals.

It really comes down to this: regardless of your interpretation of scripture, the legal issues or the ick factor, you should remember that we are Christians. That means we follow Christ, who said “love your neighbor as yourself” and “Love each other. Just as I have loved you, so you also must love each other.” Denying your brothers and sisters rights that you, yourself, enjoy because you don’t care for the way they live their lives doesn’t meet that standard. Now, if you want to continue discriminating against LGBTQ folks, that’s your business. But, if you do, maybe you ought to call yourself something other than a Christian. Because you’re really not.