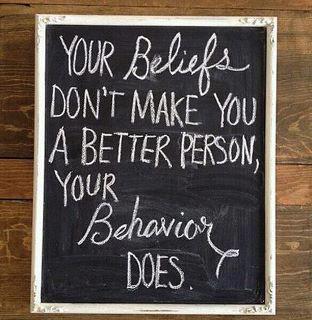 Depending on who you talk to, salvation can be a touchy subject. For a conservative evangelical or a fundamentalist, salvation is about belief; i. e. to be saved, one must believe in Jesus. To a progressive, however, salvation is as much about what you do as it is what you believe. You can probably guess what I think about all this.

For me, what you do is even more important than what you believe. Belief in Jesus (or making the decision to follow the Jesus way, to phrase things in a more progressive manner) is merely the first step. What’s the point of it all if it ends with belief? Are you truly saved if you continue to behave in the way you did before? Is there salvation in merely saying a prayer asking Jesus to come into your life if you continue to hate your neighbor?

That’s not to say belief isn’t important; if you don’t believe in something, it holds no sway over your life. It takes a certain level of belief that Jesus was actually who he said he was (or at least that his message worthwhile) to commit to following him. Don’t get me wrong, I’m not saying you can’t do the things Jesus taught without believing in him, I’m saying it makes it a lot easier if you do.

I’ve been accused of “reducing” the Gospel to a better way to live and negating both grace and the cross when I talk about this. Evidently, some folks feel if you’re not trying to avoid hell, then why bother with salvation at all? But, I don’t believe I’ve reduced or negated the Gospel at all; I’m just trying to be true to the Good News Jesus presented in his first sermon:

“The Spirit of the Lord is upon me,
because the Lord has anointed me.
He has sent me to preach good news to the poor,
to proclaim release to the prisoners
and recovery of sight to the blind,
to liberate the oppressed,
19     and to proclaim the year of the Lord’s favor

Here’s the thing, though; the idea that Gospel presents a better way of life doesn’t preclude the concept that we need saving; it just means what we need saving from may not be what we thought. Because I don’t believe in a wrathful God bound by justice to cast us into a fiery pit if don’t believe in him, I don’t need to be saved from that. What I do believe (actually, know) is that there are people in this world who need to be saved, not from what happens after we die, but from our reality, right here and now. It might be poverty, addiction, oppression, homelessness, hatred (other’s and their own), selfishness, greed etc. These are things we can do something about and, lucky for us, they just happen to coincide with the things that Jesus called his followers to address.

The truth is we all need to be saved from something. Usually, that “something” is ourselves. For me, it’s being a selfish, greedy, mean-spirited individual. Following Jesus helps me change that. Could I do it on my own? Maybe, but I didn’t. It took a church community and a serious illness to get me to turn from my old way of living.

Maybe my critics are right, maybe by focusing more on what I do than what I believe, I’m getting it wrong. But, just as I refuse to live in fear of a wrathful, vindictive deity, I also refuse to reduce Jesus’ life and death to divine fire insurance. If that’s wrong, then I don’t think I want to be right.