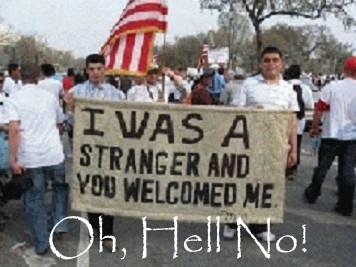 Watching the news this morning, you’d think Ukraine and Israel are the only places left on Earth. I know things are rough over there, but we’ve still got a humanitarian crisis on our hands here in the United States: the flood of illegal immigrants threatening our borders. If you listen to the talking heads, you’d think they all just evaporated when things went crazy over seas. That can only mean one thing: Obama was behind both the downed airliner and Israel’s police action in Gaza. All the fuss overseas takes the attention off of his ineptitude in attempting to destroy the United States from within by letting terrorists sneak across our borders.

We’re being invaded people! Why can’t you libtards and Demorons see that? I know it’s an invasion because two leading lights of the Tea Party say so. Michelle Bachmann said they were “invaders”, linking them to rape and an auto accident involving a bus that killed four school kids. And, Louie Gohmert (R-TX) spoke up for us on the floor of the House of Representatives, telling anyone who would listen about the rapists and murderers invading from the south and claiming “they’ve committed at least 7,695 sexual assaults,” Is that a little over the top? Maybe, but considering that the President  won’t protect our country because he’s a secret Muslim, what else are these patriotic Americans supposed to do?

Fortunately, Louie and Michelle aren’t alone, they are joined by other God-fearing Americans who are turning out to protect our borders. People like militia member Chris Davis, who told prospective immigrants “Get back across the border or you will be shot.” Not only that, Governor Rick Perry and FoxNews anchor Sean Hannity  took a turn patrolling the border along with Davis and his compatriots. Heck, even the KKK (the epitome of God-fearing Americans) has joined the fight.

Don’t think Texas has a corner on the patriot market, though. Loyal Americans in California are doing their share, too. Like the good folks in Murrieta, who turned away busloads of these  freeloaders. They met the “invasion” of their own state like this: 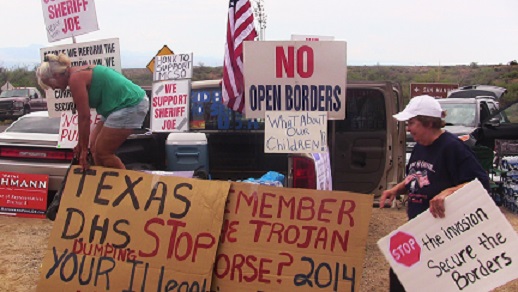 Does it bother me to be on the same side of this issue as groups some people might consider undesirable? Well, yeah, but not enough to change the way I feel because, as sure as God made little green apples, those damn illegals are going to ruin this country. And, yeah, it is kinda shitty to hold up a sign saying “Texas DHS, stop dumping your illegals here.” Especially when you’re talking about a bunch of kids fleeing horrendous violence and crushing poverty in their homeland. But, we’ve got to protect and preserve our homeland for our children. If we give all these undocumented children asylum, they’ll take things over and push us on to ever smaller patches of substandard land that no one else wants. And, that’s just wrong

Now, some liberals have spoken up about this by   claiming  early Americans were the original illegal immigrants. This argument is patently false. How could these early  Americans break a law that didn’t exist? They merely settled on land not being used to its full potential. And, they compensated the former occupants by bringing civilization to savages. How can that be illegal?

Another liberal tactic is  twisting scripture to say God wouldn’t find favor with our actions. Some even go so far as to equate what’s happening here to the Holy Family’s flight to Egypt. Oh please, as Bryan Fisher of the American Family Association pointed out, “Our southern border is there by God’s design” and those who “regard it as something not worth respecting and defending” are committing a sin against the Big Guy.

So here’s what it boils down to: if you’re not resisting this invasion of “rapists and murderers”, you’re not a good American. Shame on you.