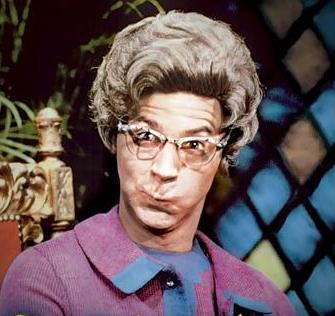 I’m a little sad this morning. Yesterday afternoon, I thought I had found the perfect subject for today’s blog post: an article claiming that Creflo Dollar said Pokemon made kids gay. Unfortunately, a little research showed this piece to be questionable; maybe even bullshit. Here’s the link so you can judge for yourself.  Now, as much as I love writing about a prosperity gospel preacher named “Dollar”, I just couldn’t do so using a source that I felt was questionable (I do have some standards, you know). So, with tears in my eyes, I deleted what little work I had done and started looking for something fresh. Fortunately, thanks to Tony Perkins and the Family Research Council, I didn’t have to look all that far.

On the Tuesday edition of the FRC’s Washington Watch, Rabbi Daniel Lapin said that liberals are ladyboys and sexually attracted to radical Islam. In his own words:

“There are countless studies showing that feminine-type behavior produces an excess of estrogen in men and vice versa. Essentially, the left has fallen in love with the masculinity of Islam.”

You know, with this kind of actual crazy at your finger tips, why the hell do you need to make anything up?

This insantiy came up during a discussion of “why the left favors Islam and actually promotes it, even to their own demise”. Now, I may or may not be a liberal (depends on you’re talking to), but I know a few people who come down undeniably on the left side of the spectrum and not a single one of them could be considered to “favor Islam” in any way, shape or form; certainly not the point of promoting “their own demise”. I think Tony has confused not being an asshole with championing Islam. But, what do you expect from a man who believes recognizing Muslim holidays equals anti-Christian discrimination?

As for Daniel Lapin, what can you say about a guy who bills himself as “America’s rabbi”? Plenty, and none of it good. Calling yourself “America’s rabbi”, Dan? Why, that’s not a dick move at all! I will admit that my feelings on this subject may be colored by the fact that both the Dallas Cowboys and the Atlanta Braves (two teams I’ve never liked) have also done this, but it displays just the tiniest bit of arrogance (and by “tiniest bit”, I mean “tons”). Seriously, it’s one thing for other people to call you that, but taking on that title yourself? You just sound like an asshole. But, I digress.

Sometimes, I wish I understood religious conservatism’s obsession with sex; it seems like everything is about knocking boots with these people. Don’t get me wrong, as a man, I’m pretty obsessed with getting in on, but I don’t relate everything to the act. Saying that because liberals believe Muslims should be treated with respect and tolerance, they want to do the nasty with radical Islam is like claiming that Right wants to fuck Wall Street because it “favors” the banking industry by passing laws that benefit those guys.wome

The amount of hatred and intolerance displayed in this sound clip is truly astounding. In the space of 3 minutes and 24 seconds, these jokers managed to slam women, liberals, Muslims, gay/trans people and anyone who likes sex. That’s odd behavior for men who claim to follow a God that, in Leviticus, commanded them to love their neighbor as themselves. But, I guess that one of those verses that doesn’t count anymore.