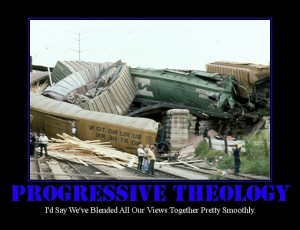 Now and then, someone will ask me, “How can you call yourself a Christian with some of the things you say and do?” There are two reasons for that: one, well, I’m not really all that good of a Christian. And, two, I am a progressive Christian. Progressive Christianity (also referred to as PX) isn’t hung up on a lot of the stuff traditional Christianity has harped on in the past, I mean, worried about: sex, drugs, alcohol, rock and roll, etc; it’s more concerned with grace and love. So, it all works out. Especially that “grace” thing; I need lots and lots of grace.

While there are several very good books and articles out there regarding what progressive Christians believe, there isn’t much about what this means in your daily life. Lets see what we can do about that.

It’s not all vegan cookies and soy milk, however. Like any theology, progressive Christianity has its downside.

This list is by no means exhaustive. In fact, it’s just a bunch of crap I threw together after the piece I had intended to write failed to come together like I wanted. That said, feel free to add any  ideas of your own in the comments. Or, disagree wholeheartedly with everything I said. Shalom ya’ll.