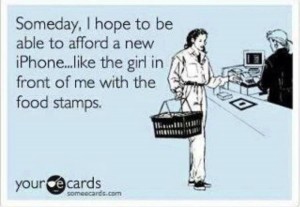 I saw this online recently and wanted to tell the poster, “What you don’t know is that the girl in front of you with the iPhone may have just lost her job and her service hasn’t been cut off yet. Or maybe uses food stamps to feed her kids because her insufficient paycheck is enough to pay the rent and utilities (and these days, a cell phone is a utility just like the lights and water). Or, maybe someone gave her that iPhone and she uses it because a phone can mean the difference between life and death and there are no more pay phones.” But, I didn’t.

I didn’t because I realized they were hurting and, this picture spoke to them. And, it was supposed to. Memes like this are targeted at working class white people who have been fed the line that the government takes care of minorities and let’s them wither on the vine. Is there some truth in that? I don’t know. But, the belief is real enough. In this excerpt from Brother To A Dragonfly, Will D. Campbell explains the source of their feelings:

“The redneck’s slavery, called indentured servitude, was somewhat, but only somewhat unlike that of black slaves. He was told that if he would serve the master for five years, or seven years, he would then be free in a new and prosperous land. But, freedom to what, and in what? Freedom to flounder , to drift, to wander west in search of what had been promised but never delivered. Freedom to compete in the wilderness with wealthy land-holders , with black labor, to fight a war to defend that system as well as his own peonage, to come back home and watch the aristocrat as tried to meet to the basic needs of those he had formerly owned and the handouts of the Freemen’s Bureau to those declared free but still valuable as working property, while he had no assistance at all.”

In other words, working-class white people feel left to their own devices to scratch out a living as best they can while minority groups live it up on entitlements paid for with their hard-earned tax dollars. Is this true? Of course not, but what’s truth got to do with propaganda?

Some of the smartest, most generous people I know have bought into the dog-whistle politics employed by the Right these days. Why do you think that is? It’s not because they’re stupid, or greedy, or hateful because they are decent, intelligent, loving people who go out of their way to help others in need. No, it’s because they believe the purveyors of those insidious code words listen to them. And, they do; unfortunately, they use what they learn from listening (the anger and frustration felt by working class whites) to divide and conquer. While much of the effectiveness of this venture can be chalked up to a very potent campaign of indoctrination, the progressive/liberal community bears some responsibility, too.

The truth is, progressives/liberals play a significant part in the alienation and abandonment these people feel. Every smug, condescending and superior comment/post/article about “ignorant rednecks” and the like treats fellow human beings as somehow “less than”. It casts them as ignorant, benighted souls in need of the enlightenment that only progressives (i.e. “smart” people) can provide. That’s just wrong.

If we’re ever going to end the bitterly partisan divide in this country, someone’s going to have to step up and actually start loving their neighbor and hear what they have to say. If we progressives are as tolerant and loving as we say, why shouldn’t it be us?