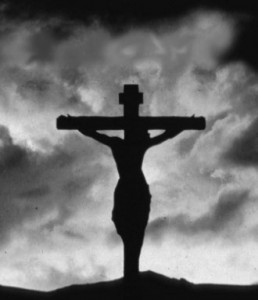 In Wednesday’s entry, I said I would try to show you some different ways of looking at the things surrounding Holy Week. One of those is the idea that Jesus had to die a gruesome and bloody death so we could be forgiven for our sins, aka penal substitutionary atonement. It seems an appropriate topic since today is Good Friday.

Penal substitution isn’t the oldest idea about atonement; that would be the Ransom theory, which was held by church fathers like Irenaeus, Origen and St. Augustine. This concept states that because of The Fall, Satan had a claim on humanity and justice required a ransom be paid to free us and that Jesus death was that ransom. If you’ve read C. S. Lewis’ The Lion, The Witch and The Wardrobe (or seen the movie) you’ve been exposed to this theory (i.e. when Aslan sacrifices himself on the stone table for Edmund’s treachery).  Toward the end of the 11th century, Anselm of Canterbury came up with his Satisfaction theory (supporters of which fueded with Peter Abelard who championed the moral influence theory). Penal substitution didn’t come along for several hundred more years when Calvin and other reformers tweaked Anselm’s satisfaction model.

Now, like most good progressives, I’m not a fan of penal substitution because the God it paints a picture of is, well, kinda douchey. I mean, really, what kind of God has to have justice to forgive those God loves? I mean, if God is omnipotent, can’t God just say “You’re forgiven” and that be the end of it? Absolutely. So, why did Jesus have to die such a ghastly death?  Maybe it wasn’t God that required blood, but us.

In the ancient world, atonement (or appeasing the gods) was almost inextricably tied to blood. In Judaism, the way one got right with God was by offering an animal for sacrifice, which was then slaughtered and the blood and fatty parts burned on an altar. That had been going on for at least a thousand years. And, it wasn’t just Jews who did this. Animal sacrifice was also a part of Greek religious life and, though the Romans ran things, Greece dominated cultural life in that part of the world. In an atmosphere like that, God just waving a hand and saying “You’re forgiven” probably wouldn’t have made much impact. As far as these people were concerned, blood had to be spilled for anyone to be forgiven for anything.

While that’s all well good for those folks, what does it have to do with me? The truth is, not a lot. I only offered the above as an alternative  to the prevailing “wisdom”. What does work for me is something I said in Wednesday’s post: that God loved humanity enough to come here and bring the world a new way to live and that Jesus’ crucifixion is an example of that amazing love. Those ideas are so compelling that I cannot help but follow.

Finally, there’s one other piece to this puzzle and it’s best explained by an except from Hugh Hollowell’s Palm Sunday homily at the Love Wins Chapel service. He said

Indeed, love does win. And, as the man said, it’s all you need.