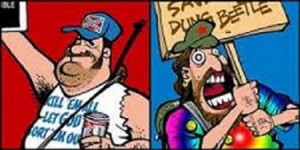 I’ll let you in on a little secret: I’m a closet optimist. Actually, “apocalopimist” is proabably a better fit. In case you’re wondering, an apocalopimist is “someone who knows it’s all going to shit, but still thinks things will turn out okay“. While that is an odd combination of optimism and cynicism, it’s a pretty good description of my thought process these days.

I wasn’t always this way, however. As a younger man,  I was a straight-up optimist;, a pretty tenacious one, too. A career in public safety, however, took care of any unrestrained optimism I might have indulged in. It did so by showing me that, as Christopher Moore said in The Stupidest Angel, “people, generally, suck”. The fact that 23 years of dealing with those sucky people (usually at their absolute worst) didn’t turn me into a complete cynic is a testament to the strength of my optimism. That vigor is getting a workout these days, though.

While I still retain some measure of optimism, more and more I feel like my friend, Suzanne Carty, who recently said “I just don’t have much hope for the human race.”  So, what’s this big challenge to my bright and shiny view of the world? The incredibly polarized society we live in, that’s what. You see, as a progressive who’s trying like hell to hang on to his redneck roots, I often feel like I’m caught in the middle of a really nasty argument.

A couple of days ago, within hours on my Facebook feed, I saw one friend refer to “NRA redneck assholes” and another post a graphic that said “We owe illegals nothing, we owe our veterans everything”. As you can see, I have friends on opposite ends of the spectrum. The thing is, both of these people have more in common with each other than those who encourage the imaginary divide that separates them.

Now, if either of my friends are reading this, they probably think I’ve lost my mind. And, on the surface, it does look that way. One of them is a genderqueer, liberal, post-Christian LGBTQ activist and the other is an evangelical Christian, conservative, biker/redneck gun  enthusiast. At the same time, both are the product of working/middle class families, both are from (semi)rural backgrounds and both are getting their asses kicked by forces outside their control. The problem is that, like most of us, they’re all so focused on their differences, they can’t see their similarities. Until that happens, we’ll never see the Kingdom on earth.

What’s the solution to the problem? I’m no expert, but I’d say a good place to start would be to stop beating the crap out of each other and love our neighbor as ourselves. For that to happen, though, someone is going to have to extend an olive branch to their (not so) opposite number. There’s a problem here, because my LGBTQ friend has suffered a lot of persecution at the hands of people like my more conservative friend. And, my conservative friend is seeing the world change in ways that are hard for him to accept at a pace that, more than likely, scares the living shit of him. So, who should be the first to step up?

Ideally,it should be the person who’s wrong. But, how do you determine that? Sure, bullying people is wrong and should never be condoned. But, at the same time, Jesus said turn the other cheek and love your enemies. So, what’s the answer? I honestly don’t know. But, in the meantime, you fuckers are harshing my mellow and I’d really appreciate it if you’d just chill out a little.