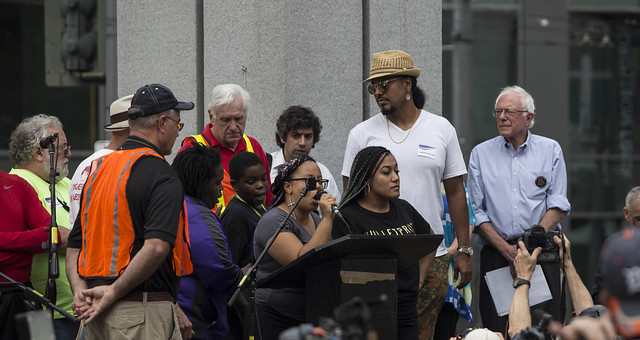 So, it seems that a couple of protesters claiming to be part of Black Lives Matter had the nerve to disrupt another Bernie Sanders campaign event. Saturday, in that progressive bastion of Seattle, two women made their way on stage and took the microphone away from Sanders to address the crowd, calling for 4 1/2 minutes of silence in honor of the 4 1/2 hours that Michael Brown’s body lay on a Ferguson street last year and not letting Sanders speak. Liberals are not happy.

So, what has gotten progressive panties in such a bunch? Not Marissa  Johnson’s and Mara Jacqueline Willaford’s attempt to exercise a little agency on behalf of their community, that’s cool. It’s the fact that they were…, impolite. No, really, that’s what people are saying. The response of many progressives hasn’t exactly been polite either and it reveals that we may not be the champions of racial justice we like to think we are.

So, what are those “not good” things that are brought to the surface? Well, lets see, there’s a certain cluelessness that rears its head every time a progressive’s commitment to racial justice is questioned. Then, there’s a plantation mentality undercurrent in the liberal backlash. And, lastly, there’s the fact that our reaction is one we rip conservatives for whenever they do the same thing.

So, let’s tackle these items one at a time:

Look, the bottom line is that African-Americans have been beating their heads against the wall for years when it comes to racial justice. If, in their frustration at not being heard, they’re a little less than polite, that’s understandable. But, maybe we liberals/progressives need to do a little self-examination to figure out why we get so upset us when that frustration comes our way. Don’t expect to like the answer, though.