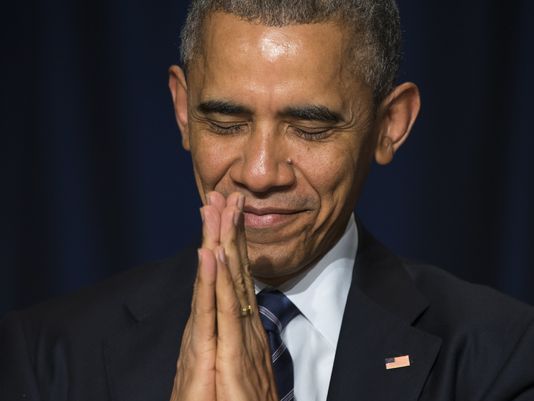 So, it appears that since the last mid-term elections, President Obama has subscribed to “No F@#ks Monthly” and his extremely low GASF was on full display Thursday at the National Prayer Breakfast. In a speech before faith and political leaders, he called out Christians for throwing rocks at Islam because of it’s more violent practitioners:

“Humanity has been grappling with these questions throughout human history,” he told the group, speaking of the tension between the compassionate and murderous acts religion can inspire. “And lest we get on our high horse and think this is unique to some other place, remember that during the Crusades and the Inquisition, people committed terrible deeds in the name of Christ. In our home country, slavery and Jim Crow all too often was justified in the name of Christ.”

Needless to say, this didn’t sit well with many conservatives. Russell Moore, president of the Southern Baptist Ethics and Religious Liberty Commission called the comments ““an unfortunate attempt at a wrongheaded moral comparison.” And, on Megyn Kelly’s FoxNews show, guests railed against the remarks for 15 minutes. But, the two best (and by “best”, I mean “most clueless”) responses come from former Virginia governor Jim Gilmore and professional blowhard Rush Limbaugh. Rush spent an entire segment of his show on what he called the president’s insults to “whole gamut of Christians” and Gilmore said “The president’s comments this morning at the prayer breakfast are the most offensive I’ve ever heard a president make in my lifetime,” further claiming “He has offended every believing Christian in the United States. This goes further to the point that Mr. Obama does not believe in America or the values we all share.” I await Franklin Graham’s response with bated breath.

I really like how Rush and Gilmore took it upon themselves to speak for all Christians everywhere. Listening to these two characters, you’d think that Jesus’ followers are a monolithic entity that always agrees on matters of faith and politics. Yeah, right. The day that Limbaugh speaks for me will be the day that hell freezes over.

I don’t know about anyone else, but I am ecstatic at Big O’s  gentle redirection of conservative Christian ire at Islam. Oh sure, it gives the people he was actually addressing too much wiggle room, allowing them to think that since our violent extremism happened so long ago, we’ve obviously evolved past that point. And, that we are therefore justified in our criticisms of Islam as a violent religion. But, we’re talking about President Barack Obama, a man that’s more progressive than even Pope Francis. All things considered, I think we can let him slide on this one.

But, you’ve got to wonder why these people are so pissed. Could it be that the Prez’s remarks essentially destroy the imaginary moral high ground from which they’ve launched their attacks on Islam as a violent religion? That his words force them to confront the fact we’re just as guilty of violent extremism as Muslims and might make it hard continue calling them out as violent nut jobs(i.e. marginalizing them)? No, that’s just crazy talk.