So, it seems that Milledgeville’s Ten Commandments “Church” has put up this sign in front of their building: 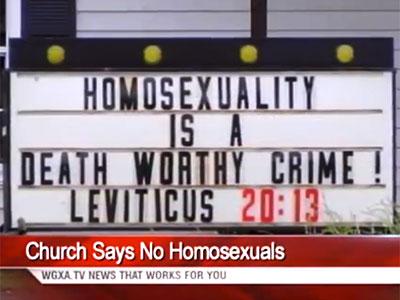 I wish I could tell you this is from one of those church sign generator sites or has been photo-shopped, but I can’t. Well, I suppose I could, but I’d be lying my ass off because it’s real.

Just so you know, there will be several terms I’ll use rather loosely in this piece (Helpful hint: look for quotation marks around a word or phrase); starting with “church” in the leading sentence because, to steal a line from Jon Stewart, Ten Commandants is no more a church than Church’s Fried Chicken. Yes, I realize it’s not very nice to the fine folks at Church’s, but I’m sure they understand that sometimes, you gotta take one for the team.

In an interview on a local news program, “Pastor” Robert Lee said he didn’t see anything wrong with the sign, claiming that he is “just quoting the Bible” (Leviticus, you know). Yes, “Pastor” Lee, Leviticuas does say that. And, Jesus backed it up by repeatedly condemning people who are LGBT to hell along with Paul, who taught that we are still bound by the law (you can’t see it, but I’m face-palming right now). It looks like Lee could teach a master’s course in missing the point when it comes to following Jesus.

Now, some folks say we should ignore groups like this and not give them any publicity. Sometimes, I agree with those people. Other times (like when I can get a blog post out of it) not so much. And, sometimes, I’ll write about something when I hear a lot of people repeating ridiculous bullshit. This is one of those times. However, instead of a point-by-point refutation of the “theology” inherent in this view, I thought I’d point out a few other offenses Leviticus 20 specifies as punishable by death:

Except for marrying a woman and her mother, people still commit each and every one of these sins, but I don’t hear Lee and his compatriots calling them a “death worthy crime”. I wonder why.