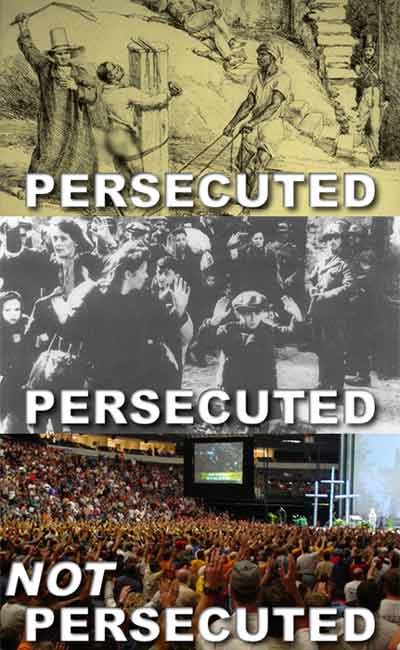 During my morning reading, I encountered yet another instance of conservative Christians claiming to be persecuted. This time, it was in an article about some Christians withdrawing into an internal exile. It’s a very interesting piece and I recommend reading it, but that’s not really what I’m talking about today. That is summed up in one quote from Carl Trueman, a professor of church history at Westminster Theological Seminary:

“…the Western public square is no longer a place where Christians feel they belong with any degree of comfort.”

There are so many thing wrong with this statement, I don’t know where to begin. I mean, there’s the arrogance in assuming that he speaks for all Christians, the idea that we’re so childish we can’t be comfortable sharing the public square with people who believe differently than we do and, of course, the notion that underpins the whole thing: that Christians are being persecuted for their beliefs

Every time I hear that “persecution” line, I am reminded of a scene from The Princess Bride where Inigo Montoya tells Vizzini (who has uttered “Inconceivable!” one too many times) “You keep using that word. I do not think it means what you think it means.” So, let’s get this straight: you aren’t being persecuted when people are tired of your shit.

It’s not persecution when someone asks you to take your boot off their neck. And, yes, Christians in America do have their boot on the neck of anyone who has temerity to disagree with them. Don’t think so? Maybe you should ask an LGBT couple who only want the same benefits and recognition for their relationship that straight couples enjoy but are denied because of the danger to “traditional marriage”. Or, you could consider the fact that one needs to be an avowed Christian to gain elected office in the U. S. Oh sure, there are a few aberrations (like Keith Ellison) and there are atheists in Congress (who can’t come out), but there are still 8 states whose constitutions bar atheists from office (even if the ban is unenforceable). Sadly, some Christians see actions like these as their right and believe that any effort to curb them is persecution.  I can’t believe I have to say this, but not being allowed to persecute others is not persecution itself.

The claim that American Christians are persecuted is a slap in the face to Christians in other countries who are actually being persecuted. In northern Iraq, Christians have been ordered to convert to Islam, leave or die and their homes and possessions have been taken by the  Islamic State. In China, Christians are imprisoned for worshipping in unregistered churches. In Israel, the abbot of a Greek Orthodox monastery was murdered by Jewish Zionists even after he met protester’s demands and removed Christian symbols around Jacob’s Well. They gouged out his eyes, cut off the fingers of his right hand and, for good measure, tossed a grenade into the church after they ransacked it. That is what persecution looks like and claiming that people calling you out for being an asshole is in any way similar is, frankly, disgusting.

Let me end this with a plea to conservative Christians: I understand it’s scary when you realize you aren’t going to be on top anymore. And, the rest of the us want to help you get past that fear and learn to live in this new world that’s coming up. But, you’re making that hard with all this persecution bullshit and we really wish you’d stop.