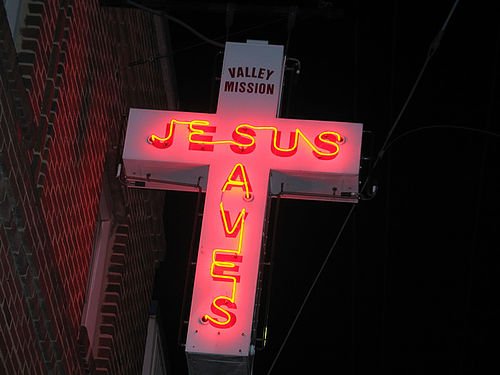 For most of my life, I was told that if I didn’t believe in God and accept Jesus as my personal savior, I would burn in the fires of hell for all eternity. Of course, it doesn’t actually say that in the Bible, but that didn’t stop people from shoving the idea down my throat. For a long time, I bought into that belief and saw Christianity as some sort of divine fire insurance. I’m not sure when the change occurred, but at some point, I gave that all that up. Now, I can’t help but think that if you are doing this Christian thing to avoid hell (because, let’s face it, that’s what this belief is really all about), you’re doing it wrong.

A classic example of this approach to Christianity can be found in Franklin Graham’s response to the Ashley Madison scandal. In a Facebook post, he told his followers “Their slogan is “Life is short. Have an affair.” This is partly true-life is short! Much shorter than imagined for some…Life is short. Get ready for eternity today. Jesus is waiting and eager to hear your prayer.” Basically, Graham uses an event that is so devasting to people that it has possibly caused them to take their own lives to shill for Jesus. Well, not actually for Jesus, but for the shallow, emotionally stunted divine fire insurance evangelical Christians have been pushing for years: follow Jesus to save yourself from eternal torment.  In one paragraph, Graham manages to minimalize every bit of Jesus’ message by making it avoiding a bad time in the afterlife. That Jesus, as a 1st century Jew, most likely didn’t believe in an afterlife doesn’t seem to matter.

In first sermon Jesus preached, recorded in Luke, he said:

The Spirit of the Lord is upon me,
because the Lord has anointed me.
He has sent me to preach good news to the poor,
to proclaim release to the prisoners
and recovery of sight to the blind,
to liberate the oppressed, and to proclaim the year of the Lord’s favor.

The language in this passage is immediate. It’s about right here and right now, not some pie-in-the-sky good times in the far-off future. This corruption of Jesus’ message, from one of action in the present to one of belief and delayed gratification didn’t happen organically; it was pushed aside by the powers and principalities that it originally attempted to subvert.

Look, whether you’re an atheist or a believer, I think you’ll agree that only goal in life worth actually having is making this miserable ball of dirt a better place to live; a place where no one is oppressed or marginalized, where everyone has enough to eat and warm dry place to lay their head, where the year of the Lord’s favor is continually proclaimed. None of that is going to happen if all we’re worried about is what happens after we die.

So, what does it mean to be “saved”? Does it mean we get to go to heaven and hang out with Jesus? Or, does it mean that we take the influence or Jesus into our hearts and stop being such selfish bastards and start  giving a fuck about our neighbor? Personally, I don’t follow Jesus so I can go to heaven when I  die; I follow Jesus because it helps me to be a better person. When I am a better person, I work to make the world a better place (aka, bringing the Kingdom of Heaven to earth). To my ears, that sounds a lot more like what Jesus taught than sitting around on a cloud, playing a harp.